Ubisoft is organising a free competition with no obligation to buy entitled “Skin a Car”. By participating in the Contest, each entrant unconditionally accepts and agrees to comply with and abide by these Official Rules and the decisions of Ubisoft Limited, 3rd floor, Ranger House, Walnut Tree Close, Guildford, Surrey, GU1 4UL (the “Sponsor”), whose decisions shall be final and legally binding in all respects.

“Competition”: means the competition with no obligation to buy entitled “Skin a Car” organised by UBISOFT.
“Rules”: means these Competition rules.

There is a daily limit to the number of entries one individual may make to the Competition. Each participant may submit daily a maximum of 5 original creations.

4. DETAILS OF THE COMPETITION

The Competition will commence on 9th October 2013 at 5pm and end on 31 January 2014 at 5pm. The date and time of receipt of email messages as recorded by the UBISOFT system will serve as proof of receipt.

To enter the Competition, each participant will be required to:

Each participant will be able to submit several designs during the Competition.
Each design submitted by the participant must be original and may under no circumstances copy, even partially, the characteristics of pre-existing designs created by third parties. Any participant who submits a design which does not comply with this condition may be disqualified from the Competition without prejudice to the participant at the entire discretion of Ubisoft. Similarly, Ubisoft reserves the right to delete any design or creation which Ubisoft judges offensive, defamatory, inappropriate for underage users or contrary to accepted standards of good behaviour.

There will be ten (10) winners (“Winner”) of this Competition.

The designs of the (10) participants located exclusively within the territory of the Competition who receive the best average number of stars for one of their designs at http://thecrew-game.com will be submitted to the “Mini” manufacturer which will select one (1) Grand Winner of the Competition based on the quality and the originality of the designs entirely at its own discretion. The nine (9) other participants who are not selected by “Mini” will then be rated from second to tenth position based on the best average number of stars received for their design at http://thecrew-game.com.
If two participants receive the same number of stars, the participant with the highest number of votes for his/her star average will be designated the Winner.

The names of the Winners will be published at http://thecrew-game.com on 17th February 2014.

The Winners will also be notified personally via the email addresses provided when the entered the Competition on the date the results are published.

Each Winner will be required to respond to the email he/she receives from UBISOFT informing him/her that they have won within three (3) calendar days following receipt of the UBISOFT email. The prizes will be sent to winners a maximum of 10 days after the release of “The Crew”.

If (a) a Winner fails to respond within this three (3) calendar day period or (b) the information he/she provided on entering the Competition proves to be incorrect, the Winner may be disqualified at UBISOFT’s discretion without prejudice to the participant. The participant who obtained the next highest average number of stars for one of his/her designs within the territory of the Competition will then be designated as the new Winner.

There will be ten (10) Winners of this Competition.

The prize values indicated represent the retail prices incl. VAT commonly charged or estimated on the date these Rules were drawn up. They are provided for information only and may vary.

Each prize is intended for the strictly personal use of each Winner.

Before receiving his/her prize, the Grand Winner will be required to sign a release in favour of UBISOFT (and its subsidiaries) in particular in relation to its incorporation subject to the terms stipulated by UBISOFT in “The Crew” for Xbox One, PlayStation 4 and PC.

No prize awarded may be contested by its Winner nor will it under any circumstances be substituted by its exchange-value in money or replaced by or exchanged for any other item. However, should UBISOFT prove unable to furnish the prize actually won, it reserves the right to replace the prizes announced by prizes of equivalent value or a similar nature. The Winners waive all rights to claim compensation from UBISOFT as a result of any prejudice suffered by the acceptance and/or use of the prize.

The full Competition Rules will be made available at http://thecrew-game.com on 9th October 2013 or sent free of charge to anyone requesting a copy in writing from:

Any such request must include the name of the Competition and the full name and address of the person making the request. On request the postage charges incurred in requesting the Rules will be refunded at the second class rate applicable at the time (one request per household, same name and address). Requests for postage refunds must be accompanied by details of a bank or post office account as all refunds are made by bank transfer.

UBISOFT reserves the right, where circumstances so require, to postpone, modify or cancel the Competition, to change the entry period and to resolve swiftly and definitively any disputes that may arise during the course of the Competition. UBISOFT may not be held liable if, due to an irresistible force or unforeseen event beyond its control, it proves impossible to honour either in whole or in part any commitments made under these Rules.

Any participant chosen as a Winner in the prize draw shall authorise UBISOFT to use his/her full name and email address freely and free of charge on any medium in the dissemination of information on the Competition and/or the publication of the results for a period of two (2) years from the announcement of the Winners.

Participants have a right to access and correct the computer file containing their personal data on request and can refuse to permit the subsequent use of their details for advertising or promotional purposes by writing to: Ubisoft, 3rd Floor, Ranger House, Walnut Tree Close, Guildford, Surrey, GU1 4UL.

Entry to the Competition implies an awareness and acceptance of the characteristics and limitations of the Internet, notably in relation to technical performance, the response times involved in consulting, retrieving and transferring data, the risk of service disruptions and, more generally, the inherent risks attaching to any connection or transfer via the Internet, the exposure of certain data to potential misuse and the risks of infection by viruses that may be circulating in the network.

Consequently, under no circumstances may UBISOFT be held liable for any of the eventualities listed below (this list is not exhaustive):

• the transfer and/or reception of any data and/or information on the Internet;
• any Internet failure which hampers the smooth running of the Competition;
• the failure of any reception devices or lines of communication;
• the loss of any emails and, more generally, the loss of any data;
• routing problems;
• the operation of any software;
• the consequences of any virus, computer bug, anomaly or technical failure;
• any damage caused to a participant’s computer;
• any technical, hardware or software failure which prevents a user from or limits his/her ability to take part in the Competition or which damages a participant’s system;
• cases of force majeure.

The Competition is governed by United Kingdom law. Entry to the Competition also implies the unreserved acceptance of these Rules in their entirety, of the rules of ethics and etiquette in force on the Internet and of any other laws, rules and regulations applicable in the United Kingdom.


This Competition is neither sponsored nor managed by or associated with Facebook in any manner whatever. Please note that you are providing your details to Ubisoft and not to Facebook. 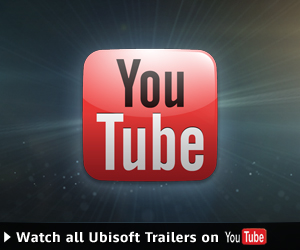